Diving deep into my email account the other week, I stumbled across some 2012 correspondence with Jay Wexler. Introducing himself as a law professor at Boston University who was working on a book about examples of religious practices harming the environment, Wexler told me: “One of the examples I’m interested in investigating is the practice of burning paper and incense in China and countries with significant Chinese populations… I came across a terrific article that you wrote about joss paper in Taiwan Today, and I was wondering if I could ask you a couple of questions about the issue that might help me in my research.”

The commentary he referred to, published in November 2010 and now back online after a few years in the vaults, urged Taiwan’s government to act against the burning of joss paper with the decisiveness they had showed when trying to curb smoking in public places. Burning such paper (also called “ghost money”) is, I wrote, “a major cause of air pollution in urban areas, especially during the seventh month of the lunar calendar, so-called ‘ghost month.'”

A couple of emails later, I mentioned the issue of mercy release. “It’s exactly the kind of thing I want to talk about in the book. Thanks very much for pointing me 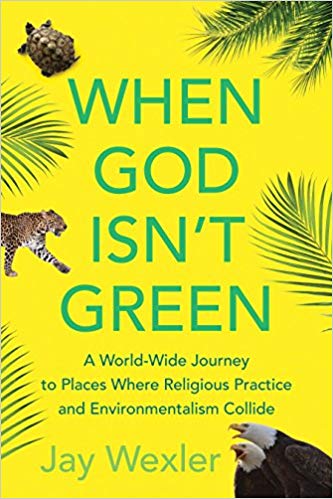 We exchanged a few more messages, then all went quiet… but he did complete his book. When God Isn’t Green came out in 2016, and in it he says he first heard about mercy release from me: “Crook explained the practice to me, and although I could hardly believe it, a quick web search confirmed its reality.”

It’s nice to think I gave a fellow writer a useful lead, and it’s satisfying that credit was given where credit was due.