Between now and the end of the year, Katy Hui-wen Hung and I will be sharing some excerpts from our new book, which is available direct from the publisher and also via Amazon.

This extract from Chapter 5: The Farms That Feed Taipei describes the poor economic situation many farmers find themselves in, and some of the cultural, social, and regulatory factors that undermine agriculture across the island.

Without them, meals in Taiwan would be dull and less healthy, and the country’s food security situation much worse. Yet Taiwanese farmers are poorly rewarded. Since the early 1970s, agriculture has never accounted for more than 40% of the total income of the average farming household. In the same period, the total disposable income of farming households (one in eleven of all households in 2015) has fluctuated between 62 and 78% of that in non-farming households. When the economy boomed between the 1960s and 1990s, many farmers – male and female alike – spent as much time laboring on construction sites as cultivating their fields.

A lingering sense of gratitude to the land that fed them and their ancestors motivates members of the older generation, but rarely inspires their children to pursue a career in agriculture. At the same time, this emotional attachment means landowners are reluctant to sell or lease plots they no longer cultivate. Around half of Taiwan’s farmers are over 65, and three quarters of them think no one will take over their fields when they are gone. But agriculture is clinging on, and cultivated land still accounts for more than 6% of Greater Taipei’s surface area.

Over the past half century, an expanding population and changing eating habits have left the island dependent on foodstuff imports. Wheat, corn and soy are grown in miniscule quantities, and less than 5% of the beef eaten is local. Few countries have experienced such a rapid collapse in their ability to feed themselves. Before 1968, food production in caloric terms was roughly equal to domestic requirements, but within two decades, self-sufficiency was below 50%. Even before Taiwan joined the WTO in 2002, farmers faced foreign competition due to rampant smuggling from China of mushrooms, tea and offal. In 2014, the self-sufficiency rate recovered slightly to 34.1%, and the authorities hope to lift it to 40% by 2020. 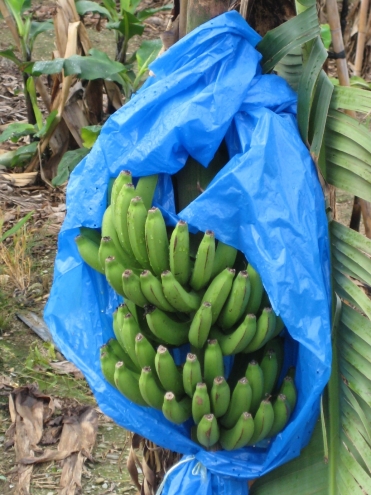 While the cultivation of genetically modified crops is not permitted, the country imports dozens of GM food products, Taiwan Business Topics pointed out in its May 2015 issue. Because inheritance customs give the oldest son half of his father’s land, with other sons (and sometimes daughters) sharing the remainder, farms have been getting smaller and smaller. By the end of 2010, average cultivated land per enterprise was down to 1.9 acres (0.77 hectares), with just one farmer in five having more than 2.5 acres. One expert who praises Taiwan as “the world’s best exemplar of high-tech, mechanized small-plot agriculture” believes government-sponsored efforts to achieve economies of scale are crucial to the future of farming. An initiative called “Small Landlord, Big Tenant” was launched in 2008 by the Council of Agriculture, the central government agency which oversees farming, fisheries and food affairs. Despite its flaws, the policy has succeeded in making thousands of acres of land available to younger professional farmers, some of whom are applying technological skills they learned in other industries. Taiwan is unlikely to meet the majority of its food needs anytime soon, but the future which faces the island’s farmers is slightly brighter now than it has been for some years.